Over the past several years, Amazon has dramatically expanded its fleet of aircraft to help it ship Amazon orders to customers faster. The growth has been so dramatic that it has fueled speculation Amazon would eventually begin flying cargo from other companies, not just Amazon packages, on its jets, whose tail fins are emblazoned with its smiley-face logo.

But Amazon has, in fact, already begun quietly transporting cargo on its planes for at least one prominent client: the U.S. Postal Service. The arrangement could portend bigger ambitions on Amazon’s part to compete with the likes of UPS and FedEx in the shipping of goods by air.

One person who until recently worked at Amazon’s air cargo hub in Baltimore told The Information that they regularly loaded and unloaded USPS cargo from Amazon planes. And in a piece of information buried in a 2019 filing with securities regulators, Sun Country Airlines—one of the air cargo companies Amazon works with—says it is obligated to carry cargo from the postal service on behalf of the internet retailer.

“Amazon has entered into an agreement and may enter into additional agreements with the United States Postal Service for the air transportation of USPS cargo on flights performed by Carriers under this Agreement,” the filing says.

In a statement, Kate Kudrna, an Amazon spokesperson, confirmed that Amazon’s planes are moving cargo for the postal service, but downplayed the significance of the arrangement. “We are always working to develop new, innovative ways to support businesses, including programs that help businesses get packages to their customers quickly and reliably,” Kurdna said. “There’s nothing new here—we’ve helped USPS in this way for years and we’re happy to do it.”

But while it’s widely known that the USPS delivers Amazon packages to the internet retailer’s customers, it has mostly escaped public attention that Amazon has agreed to transport postal service parcels on its planes. Amazon has not mentioned the air transportation contract in filings with securities regulators, and the USPS has not mentioned it in public filings with the Postal Regulatory Commission.

A rare public mention of Amazon’s transportation of postal service cargo appears to stem from an investigation by the National Transportation Safety Board into a high-profile fatal crash involving an Amazon Air flight operated by another one of its cargo partners, Atlas Air, in early 2019. Documents released by the NTSB revealed that the aircraft was carrying USPS cargo in addition to Amazon packages. The crash detail is briefly mentioned in journalist Brad Stone’s new book, “Amazon Unbound.”

“This is the first I’m hearing about it and I’ve been following Amazon for 14 years,” Marc Wulfraat, president of MWPVL International, a consulting firm that tracks Amazon’s logistics and shipping network, said of Amazon’s agreement to fly USPS cargo.

Amazon’s growing investments in its own fleet of aircraft, part of a program called Amazon Air, offers another example of how the company is seizing greater control over the transportation of goods to speed up the delivery of its customer orders. The internet retailer has also sought to reduce its reliance on outside shippers like FedEx and UPS by creating battalions of Amazon-branded delivery vans to carry packages the last mile to customers’ homes, and is playing a bigger role in the shuttling of goods between Amazon warehouses on semitrucks.

Wulfraat said the agreement with the postal service suggests that Amazon has excess shipping capacity on its fleet of aircraft, which consists of planes the company both leases and owns outright that are piloted by subcontractors. He said selling extra space to the postal service or other clients could help Amazon offset the costs of operating that fleet.

From the perspective of the postal service, which doesn’t have its own fleet of aircraft, the Amazon relationship is just another contract with an outside carrier for air transportation. The postal service also has relationships with UPS, FedEx and some commercial airlines to transport parcels.

When asked about the arrangement with Amazon, Dave Partenheimer, a USPS spokesperson, declined to respond, saying, “Like any prudent business, we do not publicly discuss specifics of our business relationships.”

Amazon’s fleet still pales in size next to those of FedEx and UPS, as the chart below shows. But the internet retailer’s efforts in the category are much more recent and are growing at a far faster clip.

Between May 2020 and May 2021, the number of Amazon Air planes transporting freight on a daily basis increased 76% to 70 aircraft active in the U.S. and four predominantly transporting goods internationally, according to flight records viewed by The Information. Those 70 U.S.-based planes completed an average of 147 flights per day in May 2021, the equivalent of one takeoff every nine and a half minutes.

And those are just the planes Amazon Air currently has in the sky. According to registration records with the Federal Aviation Administration, Amazon may have 20 more aircraft waiting in the wings. In recent years, the numbers of cargo aircraft owned and leased by UPS and FedEx have increased at low single-digit percentage rates or have even declined in some time periods. 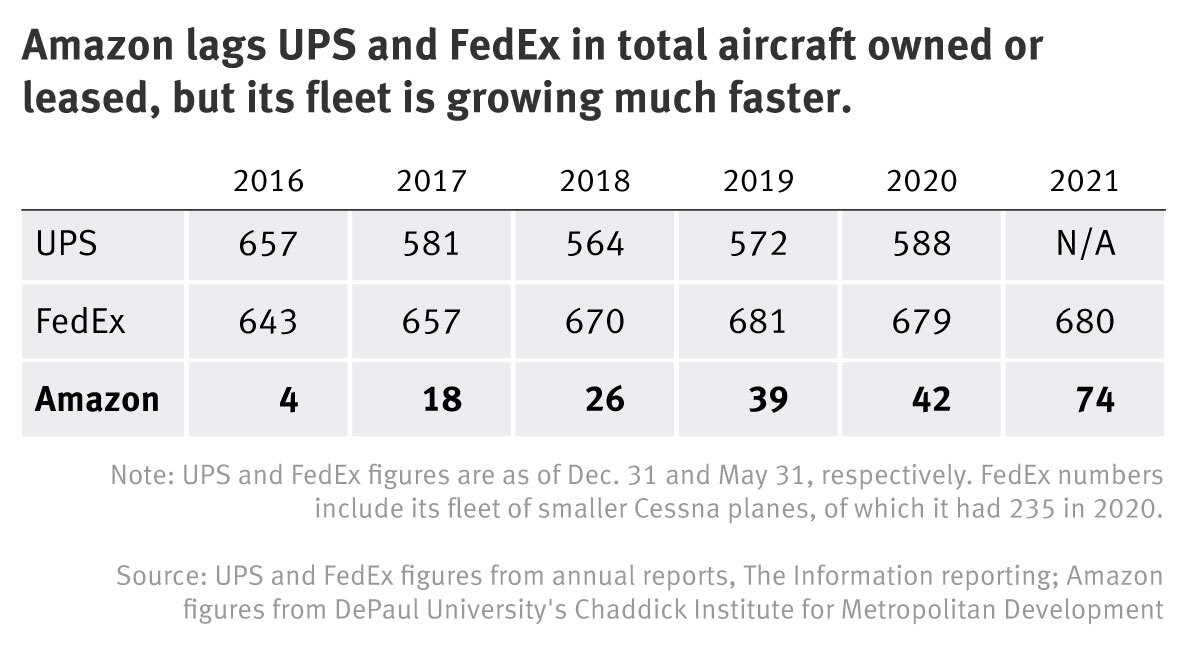 Amazon expects to have more than 85 aircraft flying in its dedicated air network by the end of 2022, said Kudrna, the Amazon spokesperson. This fall, the internet retailer is slated to open its largest air hub yet at the Cincinnati/Northern Kentucky International Airport. Such air hubs act as mini sorting centers at airports, connecting Amazon aircraft with the rest of the distribution network by transferring cargo to semitrucks and nearby warehouses as needed. The 3 million square foot logistics facility has the space to park 100 cargo planes, according to local news reports.

“Cincinnati will be a game changer,” said Joseph Schwieterman, director of the Chaddick Institute for Metropolitan Development at DePaul University, whose research has tracked the growth of Amazon Air. “They’ll finally have the ability to link vast swaths of the U.S. with overnight delivery, which isn’t possible now.”

The addition of the Cincinnati hub will put Amazon in a strong position to publicly enter the third-party shipping market, if it so desires, said Schwieterman. The new air cargo facility is located in a logistics sweet spot, with about 60% of the U.S. population located within a day’s drive, making it a perfect central hub for quickly trucking goods around the nation.

If Amazon does expand its third-party air transportation services to more outside clients, the end result would likely bear some resemblance to Amazon Freight. Launched in 2019, the program allows shippers to tap into Amazon’s expansive ground transportation network to move goods using contractors who drive semitrucks for Amazon.

“I maintain they’ll probably start with the business-to-consumer segment,” said Schwieterman. “So Wayfair or Levi’s or [other] businesses that have centralized shipping locations can use Amazon to get the product to the consumer.”

Amazon’s logistical needs lend themselves well to this model. During the holiday shopping season—known inside Amazon as “peak”—the internet retailer needs access to dramatically more transportation and delivery capacity than it typically requires at other times of year. Amazon built its previous expansions into last-mile delivery and middle-mile trucking services with flexibility to accommodate this season.

During peak season, Amazon scales up quickly with additional gig-work opportunities for drivers. But it isn’t as easy to quickly scale up and down when it comes to finding 90,000-pound cargo planes and experienced pilots.

Paris Martineau (@parismartineau) is a reporter at The Information covering Amazon, logistics and e-commerce. If you have worked for or with Amazon, she would like to speak with you about your experience. Using a non-work device, contact her via Signal at +1 (267) 797-8655.
Most popular stories this Week

The Information Investigation: Amazon Delivery Stations Have More Than Double the Injury Rate of Other Warehouses

The Information Investigation: Amazon Delivery Stations Have More Than Double the Injury Rate of Other Warehouses