When scooter-rental startup Bird goes public later this year, CEO Travis VanderZanden won’t have to worry about the firm’s uncertain prospects emboldening activist shareholders. As part of the merger with a special purpose acquisition company that is taking Bird public, VanderZanden negotiated the right to maintain control through a special class of shares that give him 20 votes per share while everyone else has one vote per share.

The Bird founder will have three-quarters of its votes until he steps down or sells most of his shares, even though he will only own about 13% of the company, a previously unreported filing shows. He is one of a growing number of tech founders who are winning the right to majority control as their companies go public.

About 19% of all companies that went public through traditional initial public offerings last year featured different classes of shares, with one class of shares having more voting power than the others. That’s up from 10% a decade earlier that had such “dual class” shareholding structures, according to research by Jay Ritter, a University of Florida finance professor who studies public market debuts. That trend was even more pronounced among tech companies. About 43% of tech firms that went public through an IPO last year, including Airbnb and Snowflake, disclosed dual-class structures, up from 6% a decade ago. The trend is also happening with companies that have gone public through direct listings, as Palantir did.

The rise of SPACs has given tech leaders another way to cement their power. Over the past year, about 20% of companies that went public through a SPAC or announced such mergers and filed paperwork with the Securities and Exchange Commission disclosed the adoption of voting rights that hand disproportionate power to founders or other early shareholders, according to an analysis of securities filings by The Information. These shareholding structures, known as dual-class or multiclass, award different voting rights to different classes of shares.

“It really has just become the norm to do this high-vote stock,” said Valeska Pederson Hintz, a partner who works on corporate governance issues for tech firms at law firm Lowenstein Sandler. Recently, she said, it has become an important consideration that she presents to firms going public via SPAC, just as it has been for IPOs.

Supervoting shares give the holders extra power in matters submitted to stockholders for approval. If the holders have majority voting control, they can forestall takeovers, block mergers and sales, determine elections of board members, and make other major corporate decisions virtually by themselves. “One way to ameliorate the pain points of going public and [having to] be a slave of quarterly earnings is to have this kind of stock,” Pederson Hintz added.

Supervoting rights have existed among a wide range of companies for decades. They’re common in the media industry, for instance, where family owners of newspapers or TV companies used the extra votes to retain control once they took their companies public. Rupert Murdoch has controlled News Corp. and its offshoot Fox Corp. through supervoting rights for years, as have the Roberts family at cable TV giant Comcast, the Redstone family at TV firm ViacomCBS and John Malone with his Liberty Media empire.

In the past two decades, tech founders such as Sergey Brin and Larry Page at Alphabet and Mark Zuckerberg at Facebook have adopted the practice. But its popularity has exploded in tech in the past few years. While private tech firms sometimes already have dual-class structures in place, many wait for a public listing to adopt uneven voting rights, bankers and lawyers said.

Founders including Evan Spiegel at Snap and Lyft’s Logan Green and John Zimmer have cemented their power through supervoting rights. Many of these executives have signaled their desire to run the company for the long term without having to worry about short-term investor pressures. Spiegel, for instance, has told fellow Snap directors he wasn’t worried about Wall Street’s concerns and wanted to focus on Snap from a 10-year time horizon, The Information has reported.

Still, it’s a fine line for founders to justify their need for supervoting rights: Does it let them take the long view or simply insulate them from shareholder pressure?

“You’ve got to justify your entrenched control” and show investors that there are still checks and balances to power within the company, said Robson Lee, a partner at law firm Gibson, Dunn & Crutcher who has advised SPAC targets in Asia. “It cannot be unbridled,” he said.

The arrangements are controversial among shareholder advocates and proxy advisory firms, who say every stockholder should have influence in proportion to the size of their holdings and worry that giving a founder controlling power will hamstring boards’ ability to oust them if things go awry. 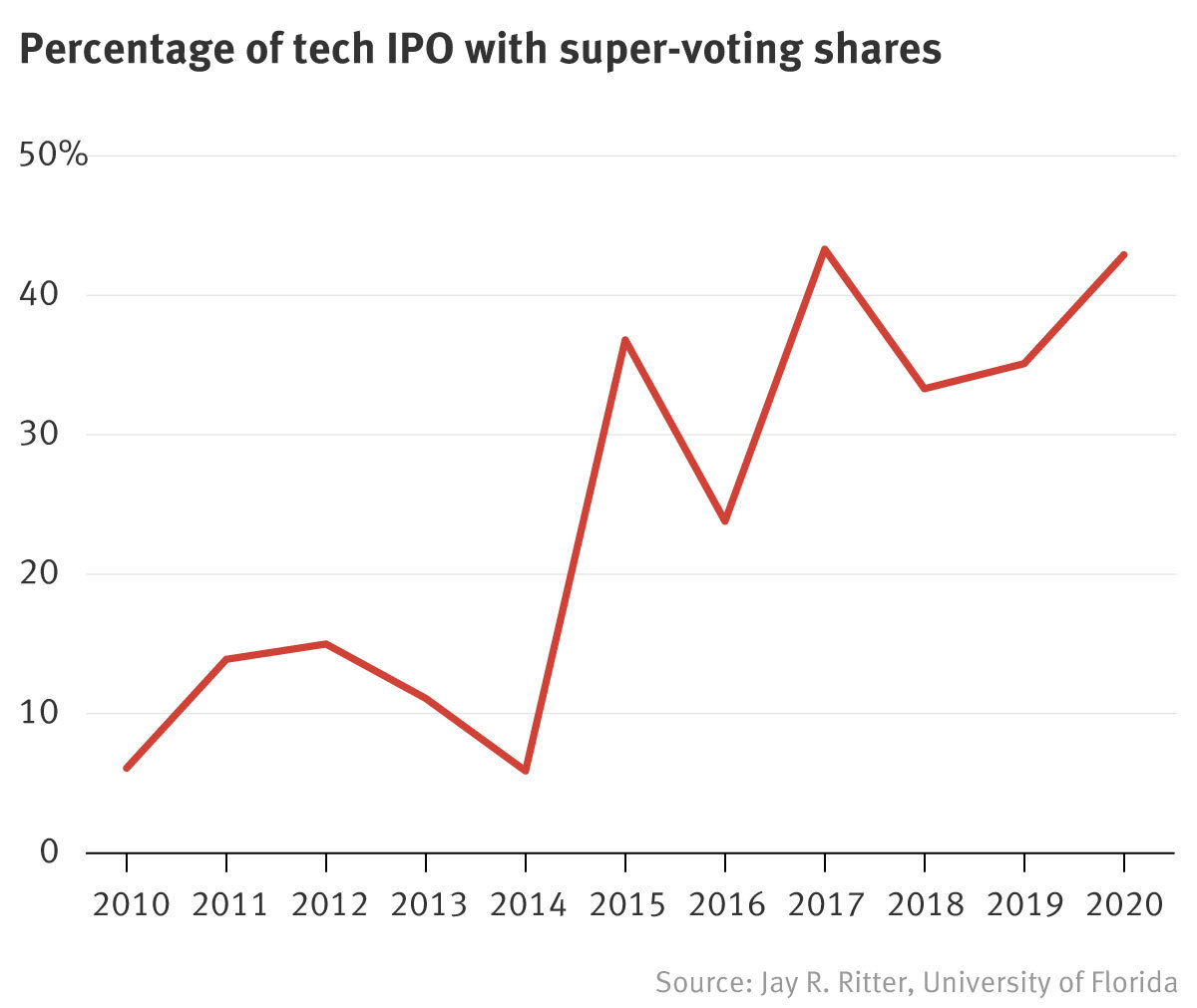 Investor backlash against multiclass share structures in recent years at companies like Snap also prompted the providers of some stock indexes including S&P Dow Jones Indices and FTSE Russell to stop adding companies with dual-class structures to many of their benchmarks.

In some cases, top executives have had to give up the control they sought. Cloud storage firm Box gave up its dual-class structure in 2018, while cable billionaire John Malone agreed to give up his supervoting rights in Discovery to seal the TV firm’s agreement to buy WarnerMedia from AT&T. In recent years, some private firms that had planned to give founders supervoting shares ahead of their IPOs, including mattress firm Casper, reduced those voting powers to appease potential public investors. WeWork, which is going public via a SPAC merger this year, has also taken away co-founder Adam Neumann’s supervoting rights.

Even so, many tech firms are continuing to adopt supervoting rights—and startups going public through SPAC mergers have extra leverage to do so. The proliferation of SPACs looking for companies to acquire has given founders plenty of bargaining power to negotiate for the best deal, including high-voting stock for themselves. SPAC sponsors have reason to agree: They stand to make enormous financial returns, but only if they can find private companies for the reverse mergers within two years.

Tech firms have a lot of bargaining power in SPACs because “you have a sponsor champing at the bit to get their 500% return,” Michael Klausner, a professor of business and law at Stanford University who has studied corporate governance and SPACs.

Company founders negotiating with SPACs have a particular incentive to secure supervoting shares for founders, said Louis Lehot, a partner at law firm Foley & Lardner. Merging with a SPAC often means companies issue more new shares to new investors than they would during an IPO, when companies typically enlarge their share count by about 10%. With all those extra shares sloshing around the public market, founders are vulnerable to an activist investor swooping in. “Founders of the target [company] want to know it won’t just get scooped up by activists and they get thrown out,” Lehot said.

Uneven voting arrangements have persisted even as total SPAC deal volume has declined in recent weeks. Satellite image company Planet Labs, for example, is exploring going public via SPAC this year instead of via a traditional IPO. As part of board-level deliberations, the company discussed allowing co-founders Will Marshall and Robbie Schingler to keep control via a multiclass share structure, according to a person with knowledge of the discussions. A Planet spokesperson said the company has had a supervoting right structure since 2012.

The use of supervoting rights by companies going public through SPAC mergers may test the public market’s already-thin tolerance for the practice, particularly because many companies now merging with SPACs have yet to generate revenue or turn a profit.

Archer, which is building electric aircrafts for short flights but does not generate revenue, awarded its two co-founders 59% of the company’s voting power, although together they owned just 29% of the business. Jonathan Rothberg, founder of life sciences startup Quantum-Si, which has no revenue, will get 80% voting control over the firm if it completes its merger with a SPAC. Spokespeople for Archer and Quantum-Si declined to comment.

Then there is Bird. Like other scooter-rental firms, it has struggled to show a path to profits. Its net losses have been more than double its revenues each of the last three years. Overhead expenses alone have exceeded revenues in those years. Covid lockdowns walloped the company further. It was down to its last $43 million in cash at the end of last year, despite having raised more than $1 billion over four years.

Even in negotiations with blank-check firm Switchback Acquisition Corp. II, the valuation put on Bird fell to $2.4 billion from $3.7 billion in February due to lower financial projections and “trends in the financial markets,” as enthusiasm for SPACs faded, the company said in a securities filing.

Bird, though, has pointed prospective investors to the relative growth of revenue in its first four years of operation, topping Google, DoorDash, Lyft and Uber.

A spokesperson for the company defended VanderZanden’s supervoting rights. “Travis’ voting position is reflective of his role as founder and CEO of Bird and is common in similarly situated companies especially when compared to those in their first four years of operations,” a Bird spokesperson said in a statement. “Bird’s experienced and independent board provides and will continue to provide additional balance and consistent governance.”

Max Simkoff, CEO of Doma, a venture-backed title insurance and escrow firm that recently merged with a SPAC, said he didn’t think a dual-class structure would provide strong corporate governance because other shareholders couldn’t “vote their interests.” He pointed to outcomes where founders were ousted, like Apple’s Steve Jobs, as ultimately positive steps for those firms.

“I just wonder whether it’s a good idea for us to be concentrating power in the hands of very few,” he said. “If you’re seeing more of it, it’s not necessarily a good thing.” 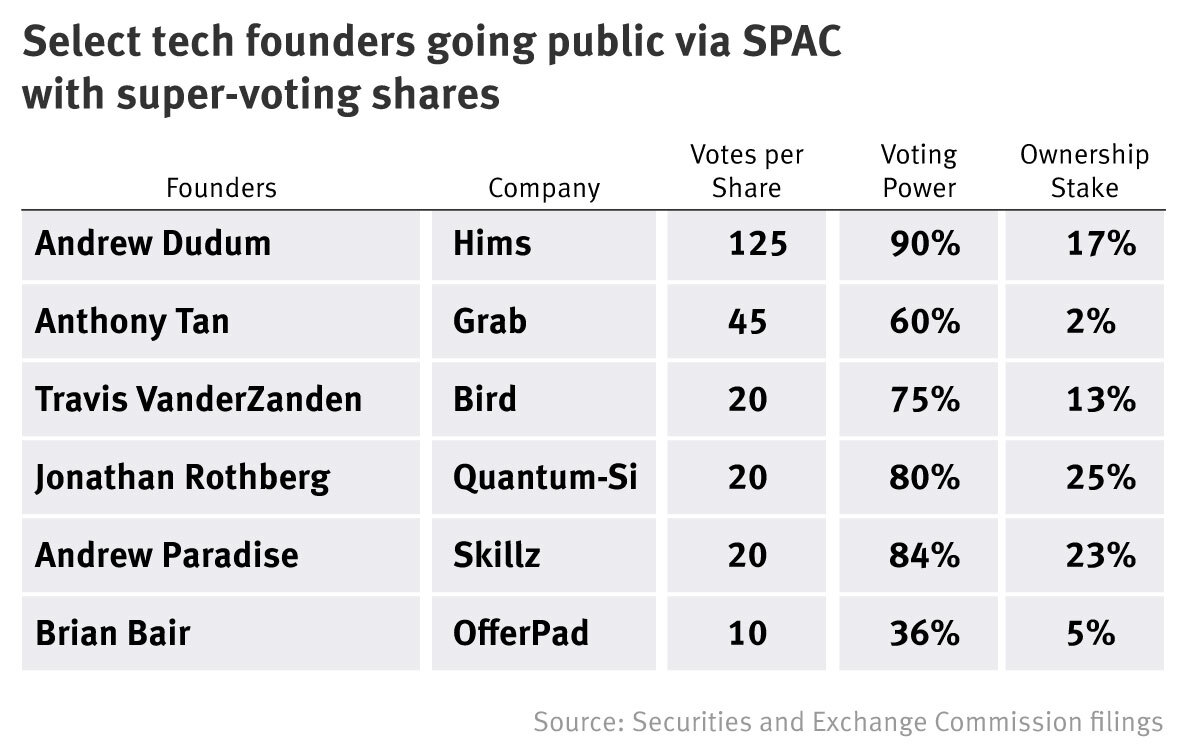 Cory Weinberg has been a reporter at The Information since 2015. He covers technology, real estate, travel, transportation and venture capital. He can be found on Twitter @coryweinberg.
Sarah Krouse (@bysarahkrouse) is a technology reporter for The Information. You can reach her via Signal at +1 (347) 436-5237.
Most popular stories this Week

Why Roku Will Buy a Movie and TV Studio

Why Roku Will Buy a Movie and TV Studio

Recent Popular Stories
The Big Read Venture Capital Startups
The Inside Story of a Scorched-Earth Breakup Between Two Founder Friends
By Janice Min
At 31, Erica Johnson, a neuroscientist and engineer, had never been rich, and certainly not tech-unicorn, eff-you-money rich.
Exclusive Asia Apple
Inside Tim Cook’s Secret $275 Billion Deal with Chinese Authorities
By Wayne Ma
Apple’s iPhone recently became the top-selling smartphone in China, its second-biggest market after the U.S., for the first time in six years.
Modest Proposals Crypto Facebook
Facebook’s Decade-Old Missteps Should Be a Lesson for Web3
By Sam Lessin
Once upon a time—that is, in 2011—the company then known as Facebook launched Open Graph, a way for users to carry their Facebook identities from app to app, thereby enabling developers to give them a personalized experience wherever they went.
Exclusive Venture Capital Startups
Airtable Valuation to Double to $11.7 Billion in New Funding
By Berber Jin
Airtable, a developer of cloud-based collaboration software, is finalizing a new round of funding that would value the San Francisco startup at $11.7 billion including the new capital, said two people familiar with the discussions.
Data Point Crypto Venture Capital
VC Investments in Consumer Crypto Startups Soar 26-Fold
By Berber Jin
Venture capitalists investing in consumer startups are writing more checks for crypto companies than ever before.
Decamped Travel
CEO Phil Libin Moved to Bentonville, Arkansas at Random—Now, He’s Planting Roots
By Annie Goldsmith
E ditor’s Note: In this week’s “ Decamped , ” catching up with Phil Libin, CEO of video communication company mmhmm and former CEO of Evernote , about the realities of leaving San Francisco for small-town Arkansas.