Comments by Amir Efrati, John W Danner, and 6 others

CHANDLER, Ariz.—Alphabet’s Waymo unit is a worldwide leader in autonomous vehicle development for suburban environments. It has said it would launch a driverless robo-taxi service to suburban Phoenix residents this year. Yet its self-driving minivan prototypes have trouble crossing the T-intersection closest to the company’s Phoenix-area headquarters here.

Two weeks ago, Lisa Hargis, an administrative assistant who works at an office a stone’s throw from Waymo’s vehicle depot, said she nearly hit a Waymo Chrysler Pacifica minivan because it stopped abruptly while making a right turn at the intersection. “Go!” she shouted angrily, she said, after getting stuck in the intersection midway through her left turn. Cars that had been driving behind the Waymo van also stopped. “I was going to murder someone,” she said.

The hesitation at the intersection is one of many flaws evident in Waymo’s technology, say five people with direct knowledge of the issues in Phoenix. More than a dozen local residents who frequently encounter one of the hundreds of Waymo test vehicles circulating in the area complained about sudden moves or stops. The company’s safety drivers—individuals who sit in the driver’s seat—regularly have to take control of the wheel to avoid a collision or potentially unsafe situation, the people said.

Suburban Phoenix, with its generally flat, straight roads and relatively light traffic, has been an ideal test location for Waymo and other developers of autonomous vehicles. Apple, which is working on its own self-driving car, recently set up a facility for testing prototype vehicles near Surprise, Ariz., west of Phoenix, according to a person briefed about the matter, a move that hasn’t previously been reported. (An Apple spokesman didn’t comment.) Uber was conducting tests in the area until it halted activity after a deadly collision in March.

But Waymo’s experience in the Phoenix surroundings is the latest evidence that it could be many years before fully autonomous vehicles replace human drivers, even in relatively easy driving environments, at any meaningful scale. While established automakers like Ford and GM, as well as startups like Aurora Innovation and Voyage, also are making incremental advances, the race to make such vehicles an everyday reality hasn’t progressed far beyond the starting line, say people in the field.

In many ways, Waymo’s challenges mirror those facing General Motors’ Cruise, whose Chevy self-driving car prototypes criss-cross around half of San Francisco every day. Cruise safety drivers regularly need to take over to save the vehicles from collisions, said a person briefed about the data.

A Waymo spokesman said in a statement that as “the only company with a fleet of fully self-driving cars on public roads today,” safety “continues to be our highest priority.” The vehicles are “continually learning, and we’ve developed robust testing and validation processes that will allow us to safely expand our vehicle’s driverless capabilities over time,” he said.

The optimism surrounding Waymo’s work on autonomous vehicles has stemmed in large part from positive signals that the company itself has offered. Sometimes, however, the information provided by Waymo gave only a partial picture. For example, the company last fall declared it was the first self-driving car firm to stop using safety drivers in vehicles, a significant milestone. The company released a promotional video called “Waymo's fully self-driving cars are here,” which has been viewed 1.2 million times on YouTube, showing passengers inside a Waymo van with no one behind the steering wheel.

In reality, the vast majority of Waymo’s test cars continue to use safety drivers. Typically, the cars that drive without a person at the wheel have been in relatively small residential areas of Chandler, Ariz., where there is little traffic, according to people familiar with the program. And these vehicles are monitored closely by remote operators that can help the cars when they run into issues. (Waymo last week told the Verge that its first driverless taxis would include a “chaperone” from Waymo who would sit in the cars.)

In its public statements, Waymo also didn’t disclose that the driverless testing has been limited: Vehicles weren’t permitted to make some unprotected left turns onto fast roads. “It was hyper-controlled,” said a person involved in the testing. The testing has progressed since then, but it is generally away from high traffic areas.

Among numerous other issues: The Waymo vans have trouble with many unprotected left turns and with merging into heavy traffic in the Phoenix area, especially on highways. Sometimes, the vans don’t understand basic road features, such as metered red and green lights that regulate the pace of cars merging onto freeways. (See details in graphic below.)

The biggest issue for Waymo’s vans and other companies’ prototypes is human drivers or pedestrians who fail to observe traffic laws. They do so by speeding, by not coming to complete stops, by turning illegally, texting while driving, or with an endless array of other moving violations that have become an accepted part of driving. Waymo’s prototypes sometimes respond to these maneuvers by stopping abruptly in ways that human drivers don’t anticipate. As a result, human drivers from time to time have rear-ended the Waymo vans.

People who have worked at both Waymo and at other autonomous vehicle developers said Waymo has been further ahead because it has the most experience testing on public roads. That perception has driven up Waymo’s perceived value: Morgan Stanley projected that Waymo could be worth $175 billion, based in part on the tens of billions of dollars it could eventually generate from autonomous taxi rides.

Waymo’s leaders also are concerned about the potential impact of an accident similar to the one in which a prototype Uber self-driving SUV struck and killed a pedestrian in nearby Tempe, Ariz., in March. Uber’s entire program was imperiled. Waymo made some changes following the Uber incident, including mandating that a second person accompany the safety driver to keep the driver more alert.

Waymo, which was formed in late 2016 after being run as a project within Google, has given few details about its proposed taxi service in the Phoenix suburbs. Its roster of 400 or so “early riders”—residents who get picked up from home to go to work or school every day, or to get dropped off at the doctor’s office—have signed non-disclosure agreements and aren’t supposed to speak to the media without Waymo’s oversight.

The Information interviewed local residents who encounter Waymo’s vehicles the most—those who work at offices near the Waymo depot, including at a pot dispensary, a water-well driller, and a PepsiCo juice distribution center. While some people who were aware of the vehicles didn’t have complaints, more than a dozen individuals who work at those nearby businesses said the same three words when asked about the vans: “I hate them.”

The Waymo vans have trouble with many unprotected left turns and with merging into heavy traffic in the Phoenix area, especially on highways.

April Cusick, who works in the same office as Mrs. Hargis, said the Waymo vans make her uneasy when she encounters them while driving in the opposite direction on East Fairview Street, a two-lane, two-way road with no lane markings, next to which Waymo’s depot is located. The white Chrysler Pacifica minivans, emblazoned with “Waymo” on the sides and a black dome sensor on the roof, often drive in the center of the wide road and don’t veer to their right side until she gets close—too close for her comfort, she said. Months ago, she filed a formal complaint through Waymo’s website. She said she hasn’t heard back about her specific issue.

The Waymo spokesman said the company has received constructive feedback from the Chandler community that has influenced the development of its technology.

Ms. Cusick and other workers shared similar stories of waiting for minutes at a time behind Waymo vans as they struggled to turn left through the first intersection the vehicles encounter when they leave their depot. There is no traffic light at the T-intersection, the speed limit is 45 m.p.h., and the Waymo vans seemed to have trouble finding a gap in traffic during busy periods to make the turn, a problem these people said would be far less crippling to a human driver.

Robbie Monreal, a sales representative for a commercial pipe seller nearby, has had enough of the vans. He said he refuses to waste precious minutes waiting for them during his one-hour lunch break. When he has found himself behind a Waymo van at the intersection, he said he has driven, illegally, around it.

“I’m sick of them in my neighborhood,” he said.

The Waymo spokesman said the vans have steadily improved in their handling of the T-intersection near the company’s depot in the 18 months they have been there, and that it is a difficult intersection even for humans.

The Waymo vehicle is generally programmed to follow every road rule precisely. That may mean stopping for at least three seconds at a stop sign, whether human drivers like it or not, and turning on its blinkers well before it makes a lane change. “It’s still a student driver, but it’s the best student driver out there,” said another person familiar with the Waymo program. A different person who has been involved with the program said there were debates about whether to try to mimic typical human driving behavior that doesn’t strictly follow the law. But the team decided that “it doesn’t matter how a human would do it; we would need to do it like a perfect driver.”

There are days when a Waymo backup driver doesn’t need to take over the wheel to avoid unsafe conditions. Waymo’s driving has become smoother over time. It can maneuver quickly around objects on the road. It has become better at handling “double left turns,” in which two adjacent lanes turn left simultaneously, and where the trajectory of the human-driven cars next to the minivans can be difficult to predict. And it has largely mastered driving on the highway, except for merging into traffic during rush hour, when the vans are programmed to act conservatively when trying to enter a gap between cars.

Even if Waymo can ace autonomous driving in Phoenix’s southeastern suburbs, there is a question of how much of the software developed there will be able to transfer to other locations, such as the San Francisco Bay Area. Waymo has spent a lot of time creating highly detailed maps of that region’s streets to help its prototypes navigate, and has been testing the minivans in some places like Palo Alto and Los Altos, in preparation for a robo-taxi launch someday. A lot of customization and repetitive testing is necessary to help the cars adjust to different terrains and driving customs.

As Waymo and other companies grapple with the manifold challenges to autonomous driving, some privately concede that flawless performance could be elusive. Ultimately, said a person with extensive recent experience at Waymo, “what we are going to have to accept if we want this autonomous vehicle future is that the robot driver doesn’t need to be perfect; it just needs to be better than us.” 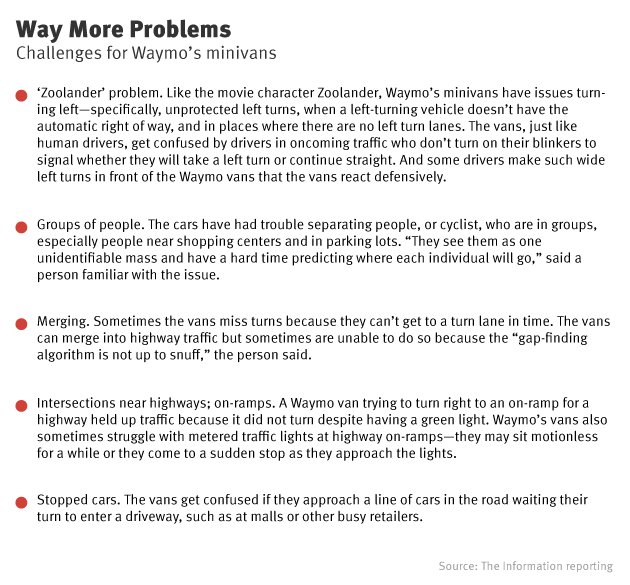 Correction: Waymo vans might stop for at least three seconds at a stop sign. A previous version of this article said five seconds.