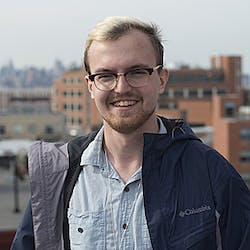 Mathew writes Reality Check, The Information's AR/VR newsletter. His journalism career began with a freelancing gig at Wirecutter, followed by a role at Digg in 2016, where he covered tech, entertainment and internet culture at large. His work has included data-driven analyses of the Oscars and an investigation of the Fyre Festival debacle. In 2019, Mathew joined the team at USgamer, tackling daily news alongside features on video game development, hardware, VR titles and arcades. Mathew grew up in the tech-saturated Puget Sound, studied economics at Reed College and currently lives in Queens, New York with his partner and a small rabbit named Pablo.

A Gaming Veteran on the VR Market and ‘Crunch Culture’

TI Reality Check: How a Stanford Professor is Using VR to Measure Minds

An AR Stock Gets Caught Up in the Meme Cycle